EXCURSION TO THE WORLD OF PAINTING (part 2)By depicting reality on a two-dimensional plane, painting creates the illusion of three-dimensionality and volume: people and objects appear to be at different distances from the viewer — some closer,…

WHAT IS ENAMEL?Enamel is a glassy, ​​frozen mass of an oxide composition formed by partial or complete melting, sometimes with the addition of metals, deposited on a metal base. Other materials and…

HISTORY OF THE DEVELOPMENT OF THE DUTCH AND FLEMAND STILL LIFE (part 1)In the 50s and 60s of the 16th century, the situation in the Netherlands became extremely tense. If in the first half of the century the burden of economic exploitation… 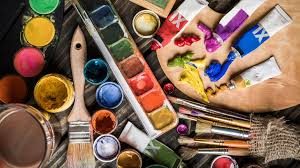 The Association of Fine Art Workers (ARIZO) – was organized in Samarkand in 1929 at the initiative of young self-taught artists. Subsequently, other artists from Samarkand and Tashkent, former members of the Tashkent branch of the Academy of Arts, entered it. The purpose of the Association was the association of artists of Uzbekistan. ARIZO advocated the connection of art and the masses, for the reflection by artists of modern life. ARIZO included about a hundred members, including A. N. Volkov, I. I. Ikramov, V. L. Rozhdestvensky and others. The head of the Tashkent branch was M. I. Kurzin, the Samarkand branch was headed by O. K. Tatevosyan. In Samarkand, ARIZO organized training “Experimental-production workshops of spatial arts.” The members of the Association carried out great propaganda work among the population, discussed the problems of the development of national art, participated in the design of city streets, work clubs, etc. In 1931, the works of the members of the Association were exhibited at the “Exhibition of Uzbek Art” in Moscow. In 1932, ARIZO was dissolved by decision of the Central Committee of the All-Union Communist Party of Bolsheviks.

The Association of Artists of Revolutionary Russia (AHRR; since 1928 – the Association of Artists of Revolution – AHR) – was founded in Moscow in May 1922, the Charter was adopted at the same time, the name was approved, the presidium was formed (chairman P. A. Radimov, friend of the chairman A. V. Grigoryev, Secretary E. A. Katsman). On May 1, 1922, on the Kuznetsk bridge, an “Exhibition of paintings by artists of a realistic direction to help the starving” opened, which later became the first exhibition of the Russian Academy of Arts. Members of the Association considered the main task to create genre paintings on subjects from modern life, in which they developed the traditions of painting of the Wanderers. The Akhrovites fought with the left-wing trends in art, which, in their opinion, caused great harm to realistic painting, sought to prove the need for an easel story painting, and fought with the slogan “art for art.” The first members of the AHRR were its founders: A. E. Arkhipov, F. S. Bogorodsky, A. V. Grigoriev, N. I. Dormidontov, E. A. Katsman, V. V. Karev, N. G. Kotov, S V. Malyutin, S. A. Pavlov, S. V. Ryangina, N. B. Terpsikhorov, B. N. Yakovlev, and others. The organization was growing rapidly. By the summer of 1923, the Association numbered about three hundred members; its regional and republican branches began to arise, by 1926 there were already about forty of them. Among the first there were branches in Leningrad, Kazan, Saratov, Samara, Nizhny Novgorod, Tsaritsyn, Astrakhan, Yaroslavl, Kostroma, Rostov-on-Don. Participants in other art associations collectively joined the AHRR. So, in 1924, the Association included members of the New Society of Painters, in 1926 – a group of “bubovaletovites”, in 1929 – artists from the Genesis association, in 1931 – from the Four Arts society. Among those who joined the ranks of the Akhrr, there were many painters who received recognition before the October Revolution: V. N. Baksheev, I. I. Brodsky, V. K. Bialynitsky-Birulya, N. A. Kasatkin, B. M. Kustodiev, E. E. Lansere, F. A. Malyavin, I. I. Mashkov, K. S. Petrov-Vodkin, A. A. Rylov, K. F. Yuon and others. In the 1920s. The Association gained an increasing number of supporters, enjoyed the support of the state and strengthened its position, acquiring new structures. So, in 1925, on the initiative of students from Moscow and Leningrad art universities, the youth association of the AHRR – OMAHRR was created, which soon gained the status of an autonomous organization with its own charter. The main activity of the AHRR in the 1920s. steel exhibitions. Over the decade of its existence, eleven major exhibitions have taken place. In addition, the Akhra people participated in the XVI International Exhibition of Arts in Venice (1928), in the USSR Art and Industry Exhibition in New York (1929), and also showed an independent exhibition in Cologne (1929.

LENINGRAD SCHOOL OF PAINTING (part 2)In the narrow, literal sense, the Leningrad school usually means the Leningrad Institute of Painting, Sculpture and Architecture named after I.E. Repin (LIZHSA) from 1932 until the early 1990s, its…

RUSSIAN ACADEMY OF ART OF ST. PETERSBURG (part 1)In 2007, the Russian Academy of Arts celebrates its 250th anniversary. November 17, 1757 (old style - November 6) - The governing Senate of the Russian Empire adopted a decree…